Unforgettable Islands to Escape to Before You Die

This is the fourth book in the BBC Unforgettable... series. Again I shot 26 of the places in the book, travelling the equivalent of seven times around the world on 99 different flights in a very busy year!

Islands are so often unique - their very isolation allows them to be different: culturally, socially, ecologically and even geologically! Unforgettable Islands to Escape to Before You Die takes you to some of the most spectacular islands on the planet. Some are remote, others you will never have heard of. Some are more familiar but are shown in a way that will surprise and intrigue you.

From the ancient rock island of Kubu in the middle of a salt pan in Botswana, to thriving Hong Kong Island; from the quiet remoteness of the Stockholm Archipelago to the frenetic festival on Sagar Island in the Ganges in India and even from the snowy wastes of Svalbard in the high Arctic to the deserted shores of Socotra off the coast of Yemen this book will show you a world you probably never knew existed but won't be able to resist exploring.

Unforgettable Islands to Escape to Before You Die,
by Steve Davey 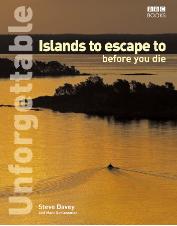 Also available in these language editions:

There are also a separate American edition.